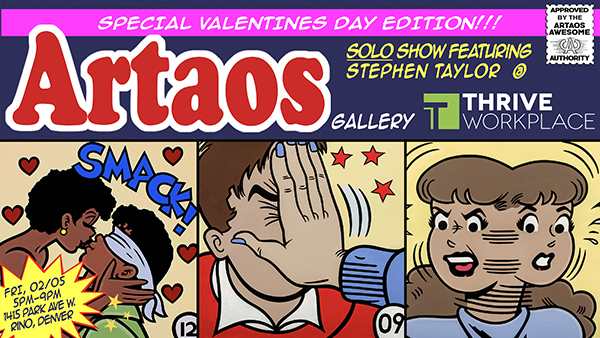 We are very excited about this new and ambitious business-art partnership between ARTAOS and "THRIVE Workplace" which allows up-and-coming artists that we work with to show in the prominent RiNo Art District.

We are promoting this as a “contactless” gallery experience where works can be purchased with a smart-phone, we will then deliver any purchases after the show comes down.

Originating from Kansas City but now based in Denver Colorado, contemporary Pop artist Stephen Taylor has been working with acrylics for over 10 years. He received his Bachelors in Studio Art from Kansas State University with a concentration in painting and as an undergrad was the cover artist for Touchstone Magazine.

Stephen would later feature in The Beat Generation Art Show before moving to Colorado. He would get his start in RiNo at the Blue Moon Brewery where he was the artist of the Month, November 2019. Stephen would later go on to show at the KNOCKOUT Exhibition on the Dairy Block and be a part of the Black Love Mural Festival in Civic Center Park. Stephen credits the Pop Art movement as his biggest influence as well as classic comics and advertisements.