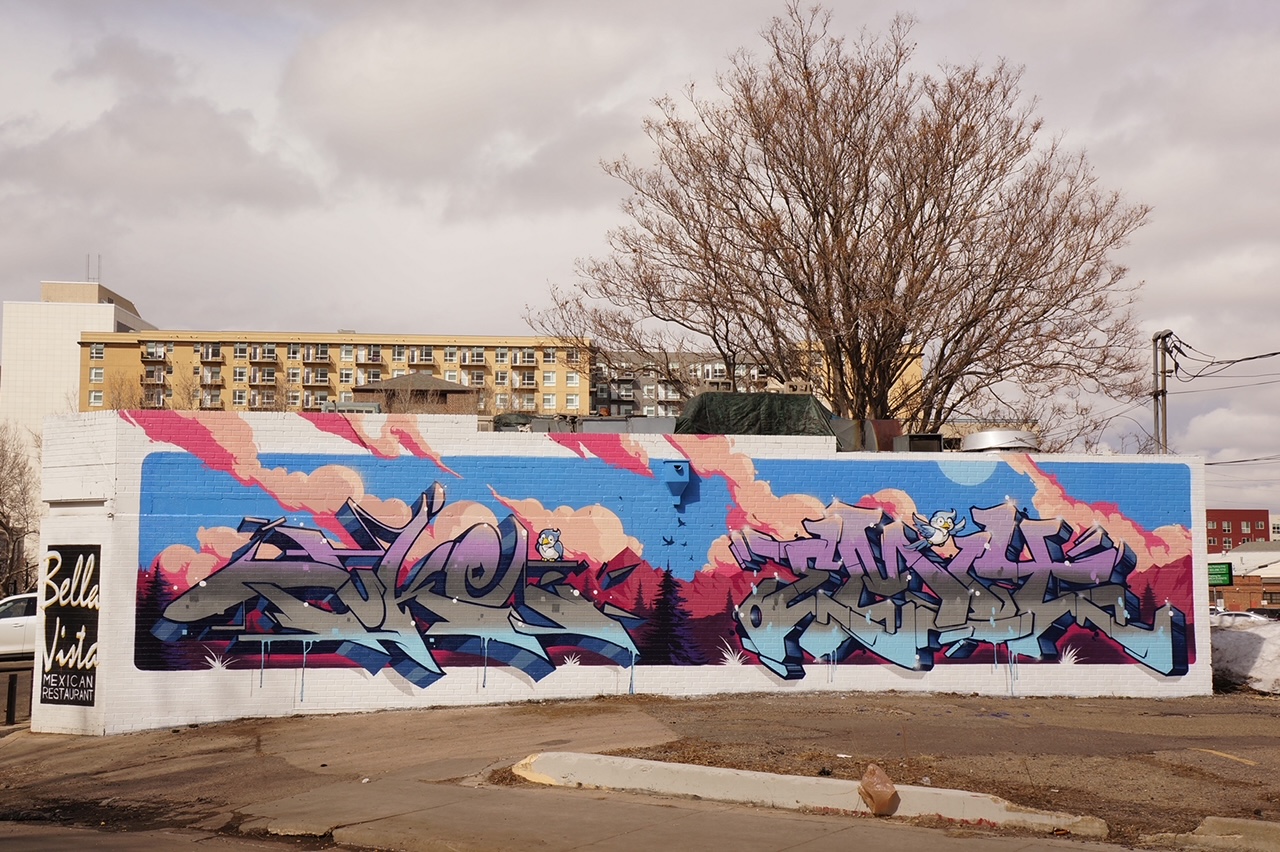 WHEN: Starting August 1st and being installed over the following week or two. Artists will be painting during the cooler hours of the day so be sure to stop by and see the progression of this awesome collaboration.

Thank you to Eden's and Veritas for their additional sponsorship to this month's mural installation.

RTD Crew was founded in 1991 by Shoop and a fellow tagger on East Colfax Avenue in Denver. The two frequently rode the 15 writing graffiti on the buses and everything else they could, so it seemed appropriate to name a crew after Denver's transit system. In the late 90's, the crew became synonymous with pushing the envelope in legal and no-so-legal murals, or what would later become known as "street art". RTD has since expanded throughout the southwest and many other states, and flourished into one of the most well known graffiti crews in the US, known for covering all aspects of the game including elaborate productions and murals.

DF Creatures Crew: Graffiti culture has gone from a small but devoted urban following to widespread popularity. It now influences everything from popular music, comics, and fashion to tattoos and advertising. After 27 years of collaboration, the DF graffiti crew is recognized worldwide as the preeminent purveyors of this art form that operates with equal panache in plush venues and subterranean, often illegal, locales. The DF crew consists of over 20 artists from across the United States, whose grotesque juxtapositions of the everyday and the extraordinary show why the group is so distinctive. Both collectively & individually, DF has left their mark on the graffiti landscape all over the world and the crew members have shown their work in over 60 group or solo gallery & museum shows all throughout the US as well as Canada, Japan and England. Using graffiti as an artistic stepping off point, many have explored other areas of the arts including commercial design, still life & landscape painting, toy design, authoring & illustrating children's books, tattoo artists, and in one case, aspiring rodeo clown!

The goal of the RiNo Mural Program is to continue working with a diverse group of local artists to facilitate monthly installations around the district so that each piece may receive proper recognition and the work that is done is more intentional on time and placement. All artists will be paid for their work at an industry standard rate. Providing reliable stipends in an unpredictable time helps keep art and artists at the heart of RiNo.