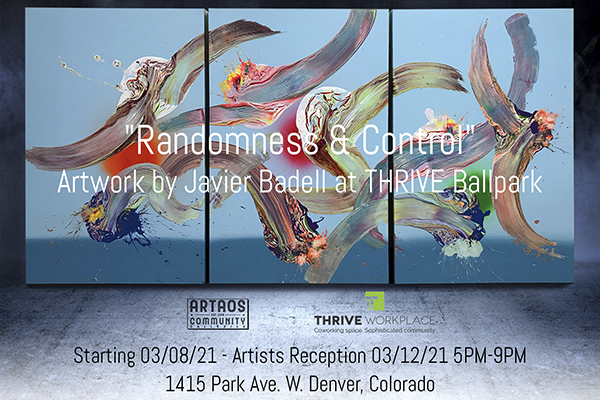 This is the second of many ARTAOS-Community shows at THRIVE Ballpark. Artwork on display 03/08/21 - 04/09/21 Mon - Fri, 8am - 5PM. Contactless purchasing available. ARTAOS-Community is an effort to create sustainable Business-Art Partnerships in Denver that support local artists in high-profile areas. Find out more at www.artaos.gallery

At the age of 7, Javier Badell began his art exploration at the Escuela de Arte Neptali Rincón, located in his hometown Maracaibo, Venezuela. This is where his love of bright colors, lines, and textures was born. His lessons consisted of depicting still life, local landscapes, and architecture, which were already filled with vibrant colors that echoed the culture he inherited. Moving forward, Badell would seek ways to incorporate these elements into every work of art.

Badell moved to the United States in 2000 and received his B.F.A. with a concentration in graphic design from Colorado State University. Much of Badell’s early work focused on commercial arts; however, in 2018 he reignited his passion for painting. Badell’s artistic influences include Carlos Cruz Diez, Jesús Soto, and Robert Motherwell.

Javier Badell’s work oscillates between randomness and control. By mixing different paint colors and pouring them onto the canvas, Badell gives way to liquid densities and gravity. He retakes control with meticulous color selection and controlled brush strokes to blend and stretch. He aims to create chromatic discoveries that stimulate the senses.

Badell’s use of bold colors was inherited from his equatorial hometown (Maracaibo, Venezuela) affectionately named "La Tierra del Sol Amada" (The Beloved Land of the Sun). There, light beams shine almost perpendicular, penetrating life in the most honest of colors.

Badell seeks happy disasters created by pigment mixtures as well as intentional self-expression. Embracing uncertainty while intentionally pushing colors around. He balances a lack of control while remaining an agent of change, which he believed epitomizes the human condition.

Embracing the duality of accepting uncertainty and living a distinct and meaningful life is Badell’s artistic frontier.

Action and inaction. Freedom and constraint.

I also found these two excerpts, which I thought could be cool to include (maybe one not both):

"Activity and rest are two vital aspects of life. To find a balance in them is a skill in itself. Wisdom is knowing when to have rest, when to have activity, and how much of each to have. Finding them in each other - activity in rest and rest in activity - is the ultimate freedom.” ― Sri Sri Ravi Shankar, Celebrating Silence