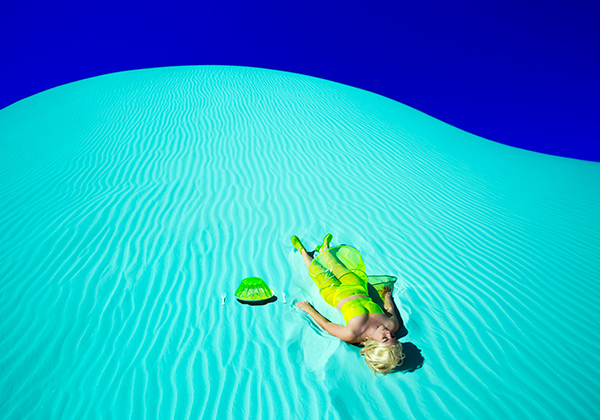 Visions West Contemporary is pleased to announce a solo exhibition, Midnight, a photo series by Los Angeles based artist Reine Paradis. An opening reception will be held on Friday, March 1st from 6-8pm. The exhibition will continue until April 6th 2019.

The Midnight series was created concurrently with a documentary film directed by Carl Lindstrom titled Queen of Paradis which follows the artist across the United States as she finds the perfect location for her colorful photographs. It’s an all-out adventure and an in-depth look at what it takes to make innovative art today. The film debuted at the Los Angeles Indie Film Festival in Hollywood, California in February. Queen of Paradis will be screened in Denver during the run of Paradis’s solo exhibition. Tickets are available at Visions West Contemporary. Date and time TBA. Please contact gallery for additional information.

Reine Paradis constructs narrative photographs staging herself as the central figure in a surreal landscape. In the series Midnight, Paradis uses neon color contrasts of almost acidic yellow set in a saturated blue background to create her own fantastical world.

Maquettes of the scenes are sketched out before the photographs are shot, the artist then constructs and paints accessories and props to be used in each scene. Each scene is carefully staged and edited and the resulting photographs seem to reference pop art as well as carefully arranged film stills. Each scene is an adventure and a story in and of itself.